z-index needs to use with position:relative or position:absolute 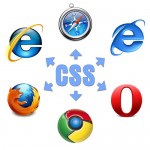 Why my z-index is not working? Because z-index only works on positioned elements (position:absolute, position:relative or position:fixed).

If you found that the element with z-index does not work, the most common reason is the element does not have position set. Just set position:absolute, position:relative or position:fixed can resolve the problem. But you may found another problem, the behaviour in IE6, IE7 and Firefox are different. Let’s look at the following example.

And below is the HTML code.

In IE6, IE7, you will see green, red, blue in top to bottom order. But in Firefox, Chrome and IE8, IE9, you will see red, green, blue order.

The problem comes from the red node, it is a child node of the blue node, and the blue node does not have z-index set.

Therefore, if you use z-index, be careful with the different behaviours in IE6, IE7.